Systematic Sexual violence against women has always been used as a strategy of warfare. In 2018, Nadia Murad, a Yazidi women survivor and women rights activist received the Noble Peace Prize. This 25-year-old shared the Nobel Peace Prize with Dr. Denise Mukwege, who has spent more than two decades in treating the women impacted by sexual violence in the Republic of Congo for their  “efforts to end the use of sexual violence as a weapon of war and armed conflict”.

In August 2014, a group of ISIS extremists invaded Kojo village in Sinjin District of Iraq, where the Yazidi minorities lived. Yazidis are an indigenous ethnoreligious community in Northern Iraq. As a part of ethnic and minority cleansing strategy by this militant group, hundreds of men and elderly women were slaughtered in Kojo and their bodies were kicked in the open, mass grave. Thousands of women and children were held in captivity as sex slaves.

Nadia told in an interview, “After what has happened to me I realize the most difficult thing is to be a woman. If I were a man when Daesh came in, I might have been killed by one bullet. But just because one is a woman she will be raped.”

Six of her brothers along with hundreds of men were killed. Nadia and hundreds of other Yazidi women were taken to a slave market where She was sold to a high ranking ISIS judge. During her ordeal in the ISIS captivity, she endured round the clock brutal physical and mental torture, including gang rape, starvation, whipping. She was sold from one man to another at frequent intervals. Once she requested one of her captors to allow her to make a phone call to any family member. She just wanted to hear a family member’s voice. She was granted permission to call her nephew for 2 minutes. In return, she had to lick her captor’s toes. She managed to escape and flee out of the ISIS territory after three months, when her captor one night, kept the door unlocked.

Few months after her escape, she decided to tell her story to the world with the purpose of drawing international attention to the genocides and violence by Islamic State extremists and demanding justice for the Yazidis. She wrote in her autobiography The Last Girl: My Story of Captivity, and My Fight Against the Islamic Statethat someday she will “look the men who raped me in the eye and see them brought to justice,” and will be “the last girl with a story like mine.” 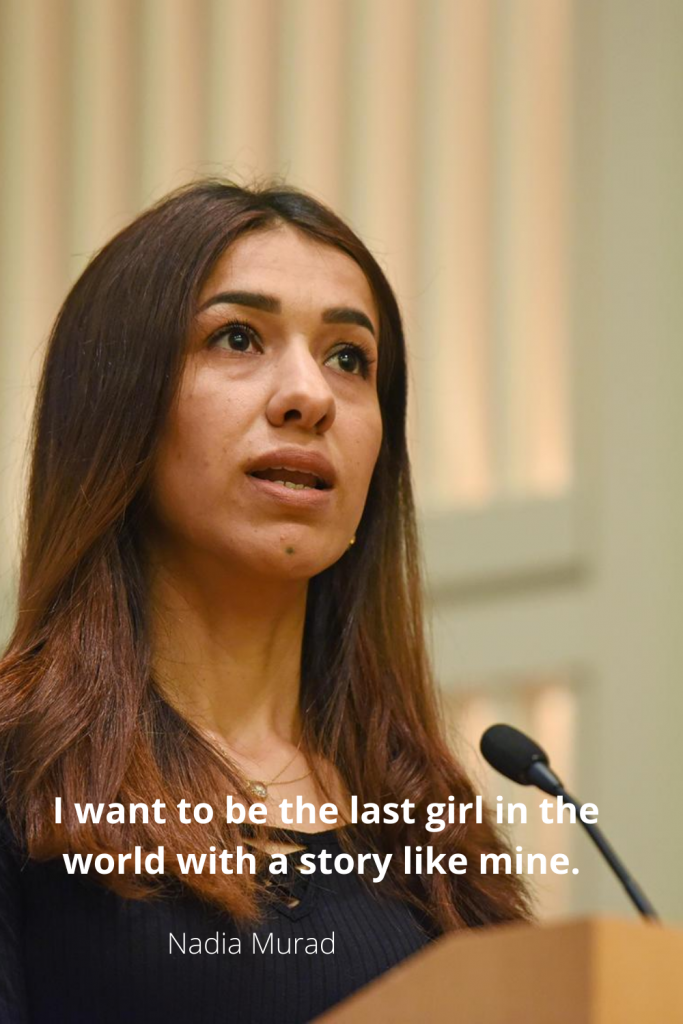 She and her lawyer Amal Clooney have addressed in front of the United Nations multiple times and called for actions to start an independent investigation to prosecute the ISIS members. She questioned about UN’s silence and inaction in investigating the killing, forced conversion, rape, genocide carried out by ISIS. UN security council called ISIS an unprecedented threat to international peace and security.

In 2016, Nadia Murad was named the United Nations’ first goodwill ambassador for the Dignity of Survivors of Human Trafficking. She was awarded the Nobel Peace Prize in 2018.

But the grim reality is that, so far no ISIS faced trial anywhere in the world. systematic atrocities against women by ISIS are very well known and they boast and accept all their crimes very openly. They trade women sex slaves with their photos, on their Facebook page. They have even set up courts to legalize the purchase of women. But no court has ever prosecuted or investigated this crime. No country or the UN could ever sight any reason as to why no action has ever been taken against ISIS.

In her Nobel acceptance speech, Nadia Murad said, “Young girls at the prime of life are sold, bought, held captive and raped every day. It is inconceivable that the conscience of the leaders of 195 countries around the world is not mobilized to liberate these girls”

Nadia’s Nobel prize is a great recognition of her fight against terrorism, ethnic cleansing, and violence against women. Her relentless battle will continue to free all the Yazidis who are still under captivities by the Islamic States and also to give justice to those who were killed and brutalized by them.  However, the world will wait for the day when she will face her captors in court.