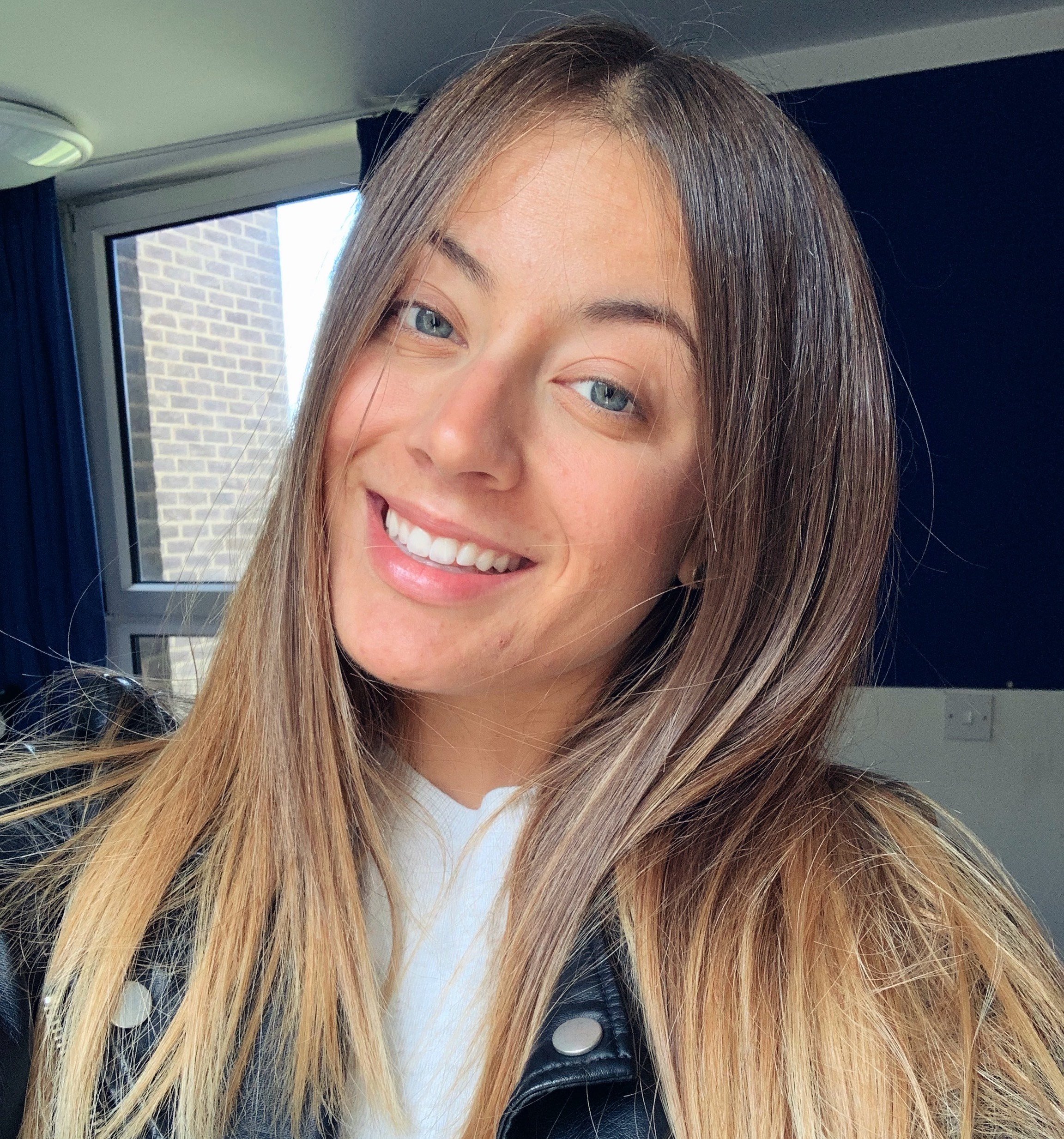 Forty-eight years after Roe v. Wade, which enshrined into law a woman’s right to get an abortion, the same right of terminating a pregnancy is still argued by politicians across the United States. With the strictest abortion law in the country (S.B.8) signed by Texas Gov. Greg Abbott in May and into effect since September, and the Supreme Court’s decision not to interfere with it, a human rights crisis commences.

How did the most developed Western democracy come to this point?

Roe vs Wade: how it all started

On Jan. 22, 1973, history changed its course in the United States: in the case that set the precedent, Roe v. Wade, the Supreme Court guaranteed women the right to terminate a pregnancy before viability, by legalizing abortion in the U.S. How did the Court arrive at that decision?

“Roe” is a pseudonym for Norma McCorvey. She was a single mother living in Texas, who in 1970 sought to terminate an unwanted pregnancy but she couldn’t do so because in the state of Texas women were legally eligible for abortion only if their lives were endangered. “Wade” stands for Henry Wade, the District Attorney of Dallas County, Texas. Norma McCorvey sued his office with the purpose to prevent him to enforce Texas law, which prohibited abortion in all cases unless the life of the pregnant woman was endangered. In addition to this, she sued the state of Texas not only on her behalf but also for all the other women who were “similarly situated”. In a 7-2 decision, the Supreme Court struck down the Texas ban, legalizing the procedure nationwide. The Court established that a woman’s right to privacy was protected by the 14th amendment to the Constitution, and so, abortion was legalized.

In the following years, anti-abortion movements arose, and the controversial discussion about abortion increasingly affected the political and social debate across the United States. The decision has not been under attack up to this point because of the composition of the Supreme Court. However, with the last appointees by former President Donald Trump, the right-leaning pro-life Court detains the majority. Not surprisingly, women’s reproductive rights are now discussed, again.

What does the new Texas law say and prohibit?

Women’s reproductive rights were recently put into question in other occasions and places. In 2018, for example, Mississippi lawmakers argued to ban abortion after 15 weeks, and the case is scheduled to be heard this term, on Dec. 1, according to the court’s calendar.

The Texas S.B.8 bill was introduced for the first time in March, under the name “Heartbeat act” by Texas Gov. Greg Abbott. He signed it into law in May 2021 and went into effect on Sept.1, 2021. The law is one of the strictest in the United States, if not in the entire world.

As a matter of fact, the law prohibits abortion providers from carrying an abortion after a fetal cardiac activity is detected, which is usually around 6 weeks of pregnancy – when most women don’t even know they are pregnant. It makes no exception for rape or incest, thus forcing women with unwanted pregnancies to carry them, despite the trauma they have been going through. The only exception, as explained in the bill, is that an abortion can be carried after 6 weeks “if a physician believes that a medical emergency exists”. Moreover, the law allows citizens to sue abortion clinics or anyone who helps a woman terminate her pregnancy. In practice, the responsibility of enforcing the law passes from the authorities to ordinary people, who are allowed to bring civil lawsuits against abortion providers or anyone else found to “aid or abet” illegal abortions. In fact, someone who successfully denounces an illegal abortion will get a reward that can reach $10,000. 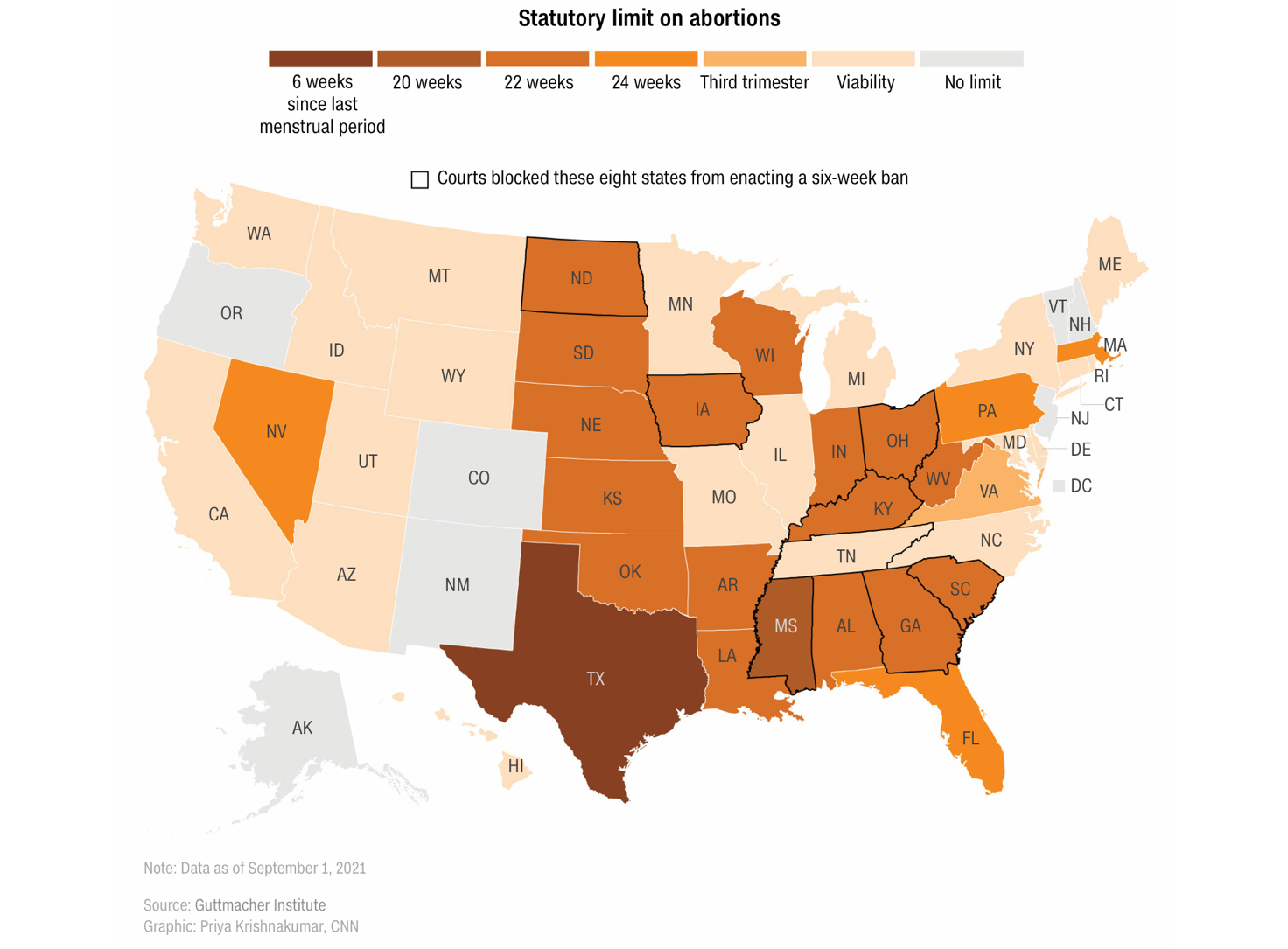 In the past, pro-choice activists have often succeeded in blocking laws of this kind through appeals to federal courts but challenging a measure such as that of Texas is more difficult, because it is not easy to identify the entity against which to appeal. What’s more, it’s the Supreme Court decision not to intervene, a reflection of the ideology of the majority of its justices (6-3 right-leaning). The reason why all this is possible is that in the United States abortion is legal at the federal level (Roe v. Wade), but there is no law of Congress on the matter. Hence, anti-abortion campaigners in red states are founding their momentum to overturn Roe v. Wade. 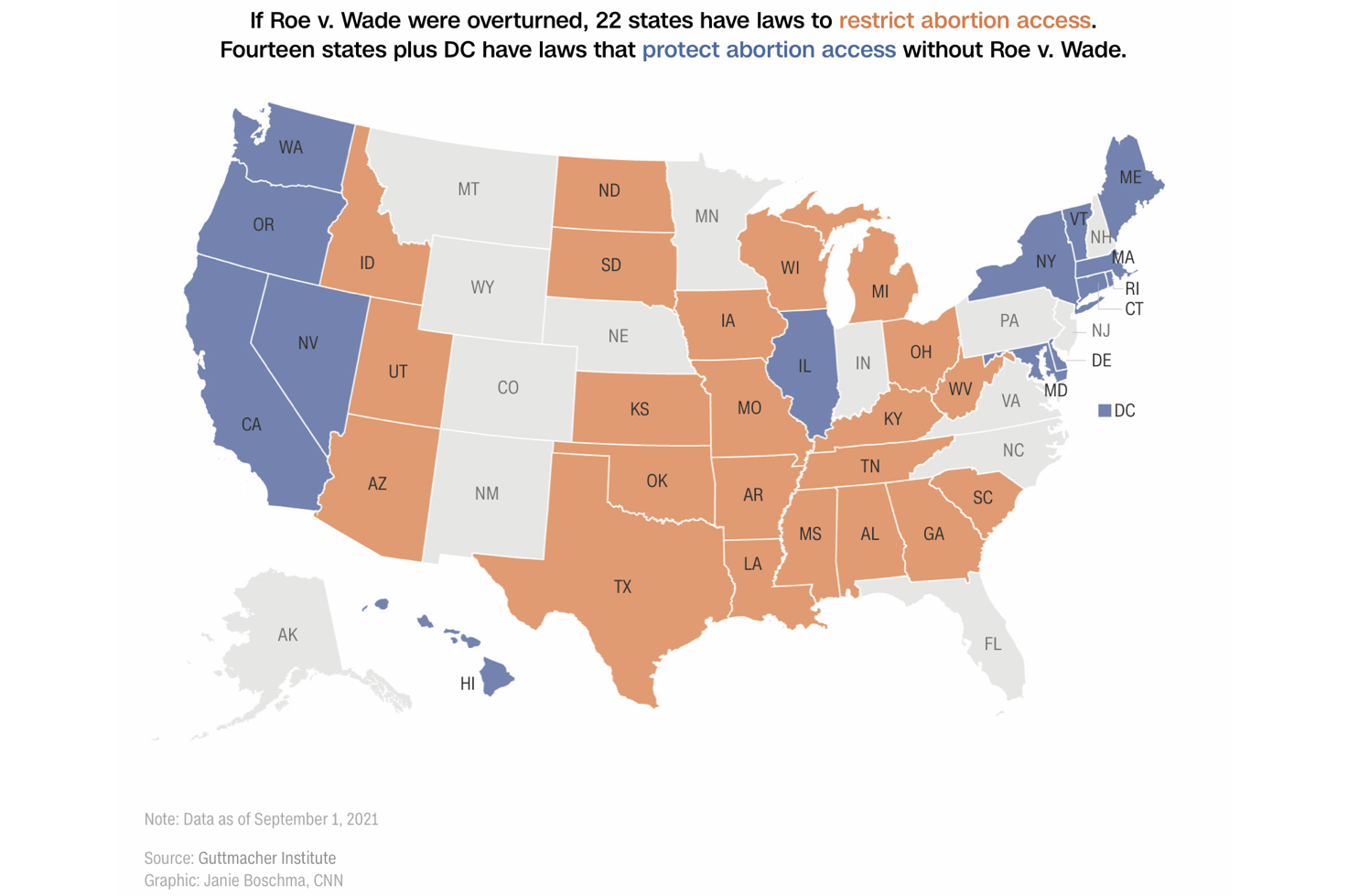 Just as the Supreme Court refused to block the Texas S.B.8, the law went into effect, becoming, as mentioned above, one of the strictest abortion restrictions in the country. In the aftermath of the passage of the law, one can easily imagine and see the consequences. In fact, the night before the law was executed, the number of women seeking abortions in clinics across Texas has skyrocketed, with even six-hour waits for getting the procedure in some places. Dr. Braid was the first doctor who broke the law and performed an abortion and has been sued. In Florida, an abortion ban modeled after Texas S.B.8 was introduced by Republican Rep. Webster Barnaby. And what preoccupies the most is how decisions and measures will unfold in other red states across the United States.

If we go deeper into the consequences of the law passage, it is indisputable that low-income and black women (the two statuses are usually interconnected) are the most affected by the (non)decision of the Supreme Court. The lack of resources to move to another state for terminating a pregnancy will lead to unsafe procedures and the choice of many women to put their lives at risk.  Abortion rights groups are opposing the law by protesting and requesting more understanding from the White House and the Supreme Court. For what concerns President Biden, he has already stated that the measure “blatantly violates” the constitutional right to abortion established by Roe v. Wade.  On the other hand, the 4 dissenting justices of the Supreme Court field their opinions.

“The court’s order is stunning,” noted Justice Sonia Sotomayor “Presented with an application to enjoin a flagrantly unconstitutional law engineered to prohibit women from exercising their constitutional rights and evade judicial scrutiny, a majority of justices have opted to bury their heads in the sand. […] The court should not be so content to ignore its constitutional obligations to protect not only the rights of women, but also the sanctity of its precedents and of the rule of law.”

Chief Justice John Roberts wrote that “The legislature has imposed a prohibition on abortions after roughly six weeks, and then essentially delegated enforcement of that prohibition to the populace at large. The desired consequence appears to be to insulate the state from responsibility for implementing and enforcing the regulatory regime.”

Justice Elena Kagan added that she opposes the rush decision of the Supreme Court – also known as “shadow docket” – as there has not been a full oral or written argument. “The majority’s decision is emblematic of too much of this court’s shadow-docket decision making — which every day becomes more unreasoned, inconsistent and impossible to defend.”

With all that said, it is still clear that the debate over abortion continues 48-year after Roe v. Wade; that Court is more divided on the issue than ever; that there’s the likelihood of similar bills proposals in other Republican-controlled states; and that in the end, as often history taught us, women’s rights are under threat.

In conclusion, one can see that the real reason for the Texas abortion ban under S.B.8 is not so people would sue, but that abortion providers would stop performing abortions scared by ending up bankrupted because of people denouncing them. Pro-life advocates found a way, or better, a language, to achieve their goal: to make abortion inaccessible. The anti-choice movement, on the other side, has no more choice. It will all culminate in the hands of nine judges. Nine judges will hold the power to change the life of millions of people and compromise the rights of thousands of women. How does the future seem for the leading nation of the free world?

(The cover image was taken after the decision on Whole Woman’s Health v. Hellerstedt Texas abortion case, Supreme Court, Washington, DC,  by Adam Fagen, and made available under a Attribution-Noncommercial-Share Alike 2.0 license, through Flicker)

Also Read: Decriminalization of Abortion in Mexico Might have a Ripple Effect Across Latin America and Beyond